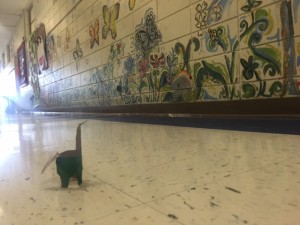 Over the past week, we have been reading our class novel, My Father’s Dragon by Ruth Gannett. The book is about a boy who travels to a mysterious make believe island in order to save a dragon in hopes of using him as a personal aircraft. Throughout the book, the boy runs into animals that threaten to harm him, but luckily, he’s packed odd items in his knapsack that he uses to get himself out of these dangerous situations with the animals.  After reading the novel, the students used cutting and folding techniques to create their very own dragon using a toilet paper roll. The students then worked in groups to make a sequel for the class novel. The twist was that they had to use their dragon that they made in class and travel our hallway which is a mural of the famous Mississippi artist, Walter Anderson. Walter Anderson is known for painting animals in their native habitats. The students found a painted scene in the mural for inspiration of the characters and setting of the story, picked an item form the knapsack that was used in solving a problem the dragon encounters, and developed a plot for the chapter their group was responsible for writing. The end product was a five chapter sequel creativity written by the whole class that was inspired by the novel, My Father’s Dragon, and the famous Mississippi artist, Walter Anderson, that we had been studying. 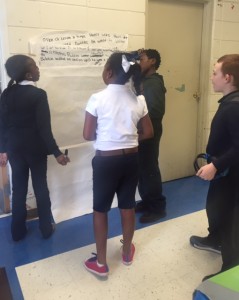 Here is one of our sequels below.

Once upon a time, there was this dragon named Bubbles. He went to Walter Anderson’s World. He first went to visit Butterflyland to get seven boogleberries for Elmer because he as sick. But he ran into seven angry butterflies, and then they started to attack him. He threw glitter on their wings. They stop attacking him because they thought there wings were beautiful.

Later that day Bubbles landed on a rock and saw an Indian. Then the Indian tried to shoot him with the bow and arrow, so he reached in his knapsack and got a skeleton. They ran away. Bubbles kept traveling and ran into rhinos.  Then Bubbles asked the rhino, “What do you know about this world?” Then the Rhino said, “I don’t know because I’m new to this world. I saw you scare the Indians with the skeleton.”   So Bubbles continued his journey.

Bubbles walked on and on until he walked into a beautiful spot called Alligator Swamp. “I am hungry for a juicy green watermelon,” said the alligator named Alliot. So then Bubbles kept walking into the swamp and he saw the alligator and the alligator saw him too!  “Why are you in my Swamp?”, said Alliot.   “I didn’t know it was your swamp.”, said Bubbles. “Now I don’t want a watermelon. Now I want YOU!”, said Alliot. “No, don’t eat me. I have something for you hunger,” he said whining.  Bubble reached into his knapsack and for some headphones. “What are those?”, said Alligator. “Something that gives you tasty food.” said Bubbles.  So he gave the headphones to Alliot and he didn’t hear Bubbles walk off.

After  that Bubbles came across an owl in a tree and Bubbles said, “Hello, Mr. Owl. What’s wrong?”  “I am afraid of heights, but I don’t know how tall my tree is.”, said Mr. Owl. Then Bubbles reached in his knapsack and got a tape measurer. “What are you going to do with that?”, asked Mr. Owl. “I am going to measure your tree for you.”, said Bubbles. Bubbles flew up and measured the tree for Mr. Owl. “Your tree is 4,000 feet talk!”, screamed Bubbles. “Thank you! Thank you!”, said Mr. Owl. Just then three fancy owls came and said, “Mr. Owl, you win the Tallest Tree Award.  Thank you, Bubbles!”

The next day they flew to Deerland and ran into two deer. The deer was weeping about their antlers being dirty. Then Bubbles said, “I know what you can use to clean your antlers.”  The deer said, “What?” “You can you soap. All you have to do is squirt the soap on your antlers and scrub it.”, explained Bubbles. Then the antlers became very white. The deer were happy and told Bubbles thank you. Bubbles almost forgot about Elmer until he ran into ta tree full of boogleberries! He took some and he flew all the way home to help Elmer.